For the past two nights we were based in Lijiang, a tourist Mecca quite unlike anything we've seen thus far. The old town's narrow streets are crammed with wealthy Goretex-clad, camera-wielding Chinese tourists, browsing artsy shops and drinking in trendy cafes.

To the city-dwelling tourists, Lijiang is the epitome of a traditional town in rural western China. However, to us, the place had a rather Disney World feel to it: conspicuously clean throughout, nobody picking through the litter bins, no filthy truck repair joints and too few aggressive dogs with a leg missing. Perhaps closer to its visitors' romantic notion of what rural China should look like, than to the reality we've seen over the past 3000km. 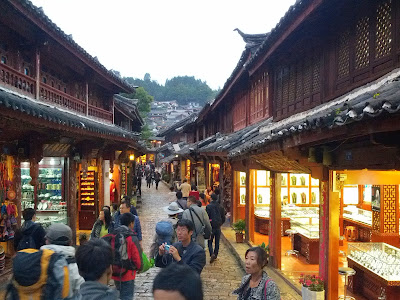